Today we continued our survey of Atlanta’s healthcare system by visiting the Children’s Healthcare Of Atlanta Egleston location. Egleston is actually 10 minutes away from our house on the Emory campus, so the drive was short and pleasant. I also think this may well be the 7th hospital we’ve visited in the last 2 months. Perhaps I should start a hospital ratings website when this is all done…

As I mentioned last week, the goal for today was for Fiona to receive an MRI to better diagnose the root cause of her hearing loss. When we entered the lobby it was quite clear to me this was hands-down the nicest hospital I’ve ever been inside. Nicer still then the Scottish Rite location I blogged about a few weeks ago. Beyond the immaculate cleanliness and “newness” feeling to everything, it had a very airy architecture sprinkled liberally with technology and relaxing “aquatic” artwork (aquariums, water sculptures, etc.). I shudder to think of the cost.

The lobby, if you can even call it that, was pure child nirvana showing not one, not two, but THREE different kids programs on different TVs. See if you can spot them all below.

As we sat waiting (not long mind you), I noticed a funny looking room off to the side: it had open glass, 7 or so microphones, and various pictures and posters on the wall. My curiosity got the best of me, it was clearly a studio of some sort, but what was it doing in a hospital? 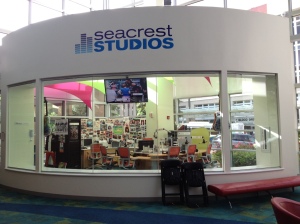 Well it turned out it was a studio donated by Mr. American Idle himself, Ryan Seacrest (kindof obvious in retrospect, but it was so out of place for me in that context). Apparently they use it for various interviews with celebrities and fund raising events for the hospital. I of course asked what celebrities they’ve seen – most are sports stars I wouldn’t know (not because they aren’t famous, but because I’m lame and don’t watch sports), but they also had a recent interview with…

So Justin Bieber you say? Well that was just too much to resist, so I had to get Fiona’s picture in front of his cardboard likeness. I’m sure she will grow up to have absolutely no clue who this is, and my what a shame that would be…

Celebrity gawking aside, we were soon escorted to our own private room by way of the “butterfly” elevator. Apparently the Wonka Glass Elevator was out of service today.

We soon got down to serious business. Since Fiona is so young, she had to be sedated for the procedure. We watched a short Simpsons-like “so you’re about to be sedated”  video, and then the nurses prepared Fiona for her IV. Mom and the nurses were fantastic, but clearly this was not Fiona’s favorite part of the day. 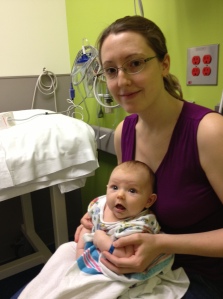 Humor aside, I won’t lie: it was pretty sad watching your baby get sedated. You feel so powerless to help your child, and worried silly something will go wrong. The staff, though, was fantastic at setting us at ease and assuring us she was in the best of hands. 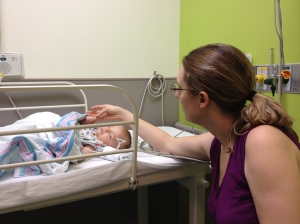 They soon took away Fiona in a gurney to get the MRI done. We were not allowed to follow, which was probably for the best, so we had about an hour to kill. The nurses gave us two options: we could hang out in our private room (which had cable TV, of course), or we could walk around the hospital and they’d call us when it was time to come back.

We chose to walk around – first grabbing some lunch at the cafeteria. The food was decent by hospital standards, and far better then the Northside cafeteria I frequented during the delivery. Eliza was also in heaven as they had Chick-Fil-A sandwiches. 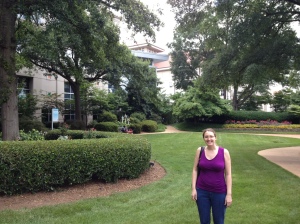 By this time Eliza was rightfully abusing me for taking so many pictures, but I had to joke since we hardly get out of the house now, this was the closest thing we’ve had to a vacation in 12 months. Kindof a funny commentary on how much our lives have changed over the last year.

As we returned, Fiona was soon carted back in. The procedure went great, but we won’t get the results for 3-5 days. Sorry for those who’ve read this far looking for the results, but you’ll have to come back to hear more.

Fiona woke up about 10 minutes later, and we were able to go home probably 20 minutes after that. As I’m writing this now, she’s continuing to sleep in the corner. A traumatic 5 hour day at the hospital for little miss Fiona, but all is well and she’s sleeping it off now.

More to come on Wednesday when Fiona gets fitted for hearing aids. The busy week continues…