Last night my ear plugs went back in. In fact, this was the first time since my post Oh Yeah, We Have a Baby. Hopefully this is not a trilogy in the making.

We’ve been told deaf infants may sleep better then their hearing counterparts, and so far have been pretty lucky. Fiona has been a great sleeper by infant standards.

On August 1st, though, Fiona hit 3 months old. According to the books and conventional wisdom, this is the age you stop “swaddling” your infant for sleep. For those who don’t know what a swaddle is (like me 3 months ago), here’s a picture of swaddled Fiona shortly after birth: 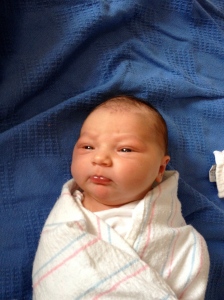 A mom would say a swaddle helps the baby feel comfortable and loved. A dad might say a swaddle looks like a baby straight jacket :-). Either way, babies love swaddling and it helps them sleep better at night.

The problem is as they grow up, they start moving. Yeah yeah, crazy! Now suddenly the swaddle becomes a danger since the baby is soon strong enough to roll over, but not strong enough to lift up their heads. Suffocation suddenly becomes a real concern. I can’t think of anything more horrible.

So as dutiful parents, we stopped the swaddling after August 1st. Unfortunately, without the swaddle, Fiona immediately started fussing more. These strange arms and legs can move, it must be play time!

Again books and conventional wisdom come to the rescue: when this happens, you need to ignore her cries for attention and train her to sleep through the night (with appropriate vigilance of course). Easier said then done.

Since we were on vacation most of last week, we chose last night as the first night to try the “ignore her pleas for attention” phase. It was rough.

As background, we have the typical modern crib and nursery setup. We have the standard baby monitor, which I must say works amazingly well. Technology has come a long way since the “crackling noisemakers” I think of from the movie Signs. This sucker is super quiet – so much so you forget its on until the baby surprises you with their mysterious “ventriloquism” act.

As a new twist, though, we also have a wireless webcam. $60 on Amazon – you can pan & tilt, use night vision, and even view it from your smart phone! How awesome is that? The webcam is a real sleep saver. If you hear a concerning sound on the baby monitor, you first pull up the webcam to see if everything is alright. The baby is none the wiser.

So last night around 2:30 am, the crying started. As dutiful parents, we watched the webcam and let her cry it out. It was tough. Every instinct tells you to swoop in and rescue your child, but logic tells you to be strong and stay the course. One hour later, the crying hit a new octave.

Here’s what it looked like. Yes I took a screenshot. 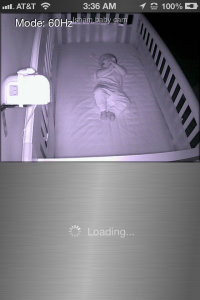 I am most displeased

This was through the camera night vision. The clock on the left – well that’s a long story, let’s just say I should stay in software and leave it at that…

30 minutes later, the crying suddenly stopped. Victory was ours! 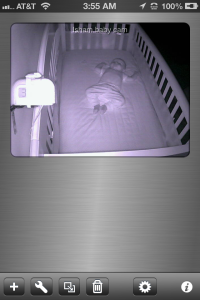 After a tired “high 5” between Eliza and myself, we settled in to salvage some sleep…for a whole 30 minutes. Like clockwork, the crying soon resumed and did not abate. Eventually we gave in at 6am to feed her and change her diaper. Chill baby returned.

As a disclaimer, mom gets 99% of the credit here. Dad helped where he could, but mom (as always) was the rock star through all of this. (and is sleeping off a well deserved nap right now).

So we’ll keep at it, but know full well this situation is in no way unique to us or to deaf babies in general. So we wanted to hear from the other mothers out there. What worked for you? What tips would you recommend? Where did we go wrong?

We sometimes get so focused on addressing her hearing loss, we forget we’re still new parents as well. Still learning this one as we’re going.