It’s interesting to think through the parallels between vision and hearing correction over the years. First you had eye glasses, which could correct the shortcomings in vision, but through an outwardly visible prosthesis you wore over your ears and nose. Over time, the glasses got smaller and the corrective powers grew larger.

Then came contact lenses, which were equally effective, but completely invisible to the outside world. No one need ever know.

Finally came LASIK, which could physically correct the shape of your eye. In a sense you are “fixing your body”.

If you think about it, hearing correction is following a similar progression. First you had hearing aids, the “eye glasses” of the hearing world. They amplify sound and are worn in an external prosthesis that sits over the ear. Over time the aids have gotten smaller and more powerful, with recent models even fitting entirely within the ear! 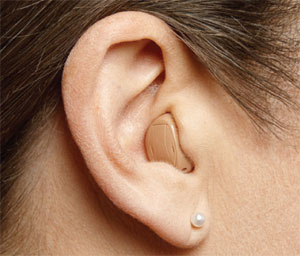 In the Ear Hearing Aid

Then came Cochlear Implants, which could actually bypass damaged hearing nerves to provide a wider range of correction. Not directly analogous to eye glasses since they do more then amplify sound, but from an outward perspective they are still bulky and noticeable: 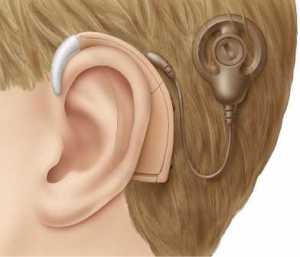 To me there are 2 logical next steps remaining in this progression: first, an entirely “invisible” corrective hearing mechanism, similar to contact lenses. And finally an actual physical “correction” to the body, similar to LASIK.

In terms of the first, research has already been underway on a “completely internal cochlear implant” for some time. As far back as 2000, a company called Epic Biosonics was working on a device that would be

(Totally Implantable Cochlear Implant History). In other words, an implant that is outwardly completely invisible!

This sounds fantastic until you read down further that “Epic ran into a particularly difficult technical hurdle and had to shelve the development of this exciting implant.” Epic was later acquired by Med-El (first discussed in my post on Big Business), which to my knowledge offers no such device currently.

In 2011 another company called Otologics was attempting the same feat, but then was later acquired by another CI vendor called Cochlear in what looks to be a bargain basement bankruptcy offering. Clearly there are some challenges still remaining with this technology, but the optimist in me feels it is only a matter of time before we figure those out.

Of course the true correction, the “LASIK” of the hearing world is further out still. There are really two aspects to this: better amplification of sound (glasses/contacts/lasik), and providing sound where there was none before (Cochlear Implants). In terms for the former, hearing loss is trailing vision loss, but in terms of the latter, hearing loss seems further ahead.

As little as I know about hearing loss, I know even less about blindness, despite being extremely nearsighted myself. I pray I do not need to become an expert on that topic, but nevertheless remain a constant technology optimist.

There are three major players in the Cochlear Implant business. The first, based in Australia, has the eminently functional, yet very uninspiring name “Cochlear“. The second, based in Austria, has an even bigger yawner name with “Med-El“. I have no idea what the “El” stands for.

But the third…the third is a doosie:  Advanced Bionics. Now how freakin’ cool is that? Lasers, top secret labs, bionic superpowers, I’m expecting it all! And hailing from the good ‘ol USA as well! Proud to be an American!

Of course, like most geeky engineers, I am a product of FAR TOO MUCH science fiction. So with a name like Advanced Bionics, I just can’t resist channeling my inner nerd…

Since we know everything on TV is always true, I figure we’re 20-30 years away from technology running amok and ultimately enslaving the human race. In fact, could Advanced Bionics be the real-world equivalent of Cyberdyne Systems from The Terminator movies? Hmmm, I might be on to something…

Doomsday jokes aside, its really cool to see competition and innovation occurring in the CI space. This benefits us all. In fact, Advanced Bionics even has an ipad app that allows you to customize the color combinations of your implant! Implants as fashion statements – something I’m sure I will never truly understand, but will no doubt be critical to our little girl as she grows up.

Check out these screenshots to get a flavor of the customization possible. The days of boring old tan colored hearing aids are so “2000-late”.

I guess it’s true, there really is an “app for that”.